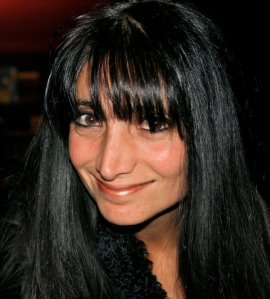 After graduating from college with a Bachelor of Science Degree in Film and Television Production, the native Los Angeles resident, Liza Kumjian-Smith moved to London in 1995 to start her professional career.  Although her field of study had been film, she had also dabbled a bit in radio, and jumped at the opportunity when she was presented with the position as host of the “American In London” radio segment on the Rodney on the Roq show on KROQ 106.7 fm (CBS), which she still continues to host today.

As well as doing a live music news broadcast, Liza supplies Rodney Bingenheimer with the latest releases from new and established acts, interviews up and coming artists, and finds great unsigned bands to feature on her show as the “ones to watch”. It is because of Liza’s show that KROQ can lay claim to being the first radio station in the US to play Coldplay, and the first to interview Oasis, Keane, Pulp, Travis, Spiritualized, and Doves. Other bands Liza has interviewed include: Radiohead, Blur, Suede, Nick Heyward (Haircut 100), Bloc Party, Arctic Monkeys, Razorlight, Ravonettes, Johnny Marr (The Smiths), and the Kaiser Chiefs to name a few.

In addition to her work in radio, Liza has also had a long and fulfilling career in A&R.  She started off as a Consultant for Jac Holzman’s (founder of Electra Records) new label Discovery Records (Warner Music Group) in 1994 where she signed the UK trip hop band Morcheeba.  Morcheeba soon became the biggest selling band for Discovery Records.  Their success brought on board the legendary music mogul Seymour Stein (signed Madonna, the Cure, The Smiths), who loved the band so much, that he bought Discovery Records from Holzman and folded the roster into his own label Sire Records.

Liza worked with Stein at Sire Records for a while before being offered a position as UK A&R Consultant for Hollywood Records (Disney) in 1998.  While at Hollywood Records, Liza worked under Rob Cavallo (Grammy Award winning producer of Green Day) to provide the label with UK artists to sign to their roster.  Artists she presented included Coldplay and Muse, who were both rejected by the label as they were thought to “have no hits” (Coldplay have now sold over 55 million records and Muse has sold over 18 million records world wide).

After wrapping on “Mayor Of The Sunset Strip”, Liza was offered the role of Music Supervisor for the British indie film “In A Day”, where she was again able to mix her expertise in music with film.

Liza has now teamed up with Music Supervisor Don Gallacher.